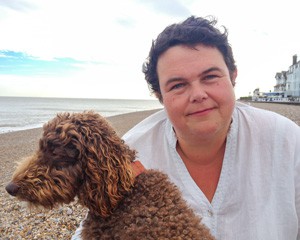 It’s been a little more than 3 months since NUBSLI was established. To mark our 100th member, we have a special interview with Lyn Chase to ask what motivated her to join NUBSLI.

How does it feel being the hundredth member?

Great! It’s mad, I’ve been encouraging everyone to join but hadn’t gotten around to doing it myself, so to be the one to put us into triple figures feels exciting.

Why did you decide to join NUBSLI?

I’ve always believed in the power of numbers and being able to make informed choices. NUBSLI is the only strong voice willing to step up and tell it how it is. I don’t think facing up to these realities is scaremongering – I think it’s a positive step towards stopping the rot.

What is your understanding of the current situation facing the profession?

Perhaps like some other colleagues, woefully thin. I live on the outskirts of even my local peer group on the coast in Kent and often feel out of the loop with current events. Like many others I lead a busy, chaotic life, and don’t always have time to read all of the thoughtful emails and notices colleagues post.

However, I do know we face a very different future, one where our hard-fought-for professional status will continue to be eroded and the environment where every Deaf person can expect an upskilled, insured professional will no longer be a reality. A trusted colleague has seen the draft of the national framework contract that may be rolled out as soon as January 2015. It states that the appropriate level of qualification for interpreters is NVQ levels 1 to 4. I also have personal experience – through my own work and my Deaf partner’s struggles – of the totally unacceptable state that the Access to Work provision is in.

What do you think a union can do?

It’s not just the strength in the number of interpreters we have but crucially the doors that are already swinging open thanks to the size, strength and longevity of the networks UNITE has. It means less time spent banging on doors and more hours spent at the table influencing decisions.

What would you say to others who, for whatever reason, are against the union?

Anyone of a similar age to me might have quite a fixed negative image of unions as patriarchal, narrow-minded politically motivated organisations. I hope that those who feel like this can try to be open minded and see what a modern union with an interpreter run branch can do for us, and the power it gives us.

Some may think, oh, just another rival organisation to join. To these colleagues I would say: please, please stop pulling away from, or flexing our muscles at each other. See NUBSLI as an umbrella organisation, or the robust vessel into which all of us, whatever affiliation we have, can come together and fight the real monsters that are attacking our professional values. Consolidate our passion so that we can have a meaningful impact on the future of interpreters and Deaf people.

Why should others join?

Because the only way is NUBSLI! Get your waterproofs on and jump aboard.