DWP market review of communication services – what you need to know 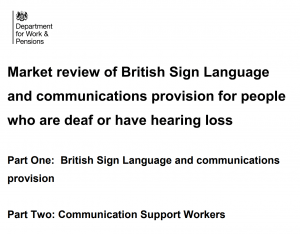 Darren Townsend-Handsomb writes about the recent publication of the DWP’s ‘Market Review of British Sign Language and communications provision for people who are deaf or have hearing loss’ findings and explains the various sections of the report that you may find useful.

You can find a link to the full report at the end of this article.

Intro to the report, and NUBSLI’s involvement

In 2015 the DWP agreed to look at communication services (interpreting, speech to text, lipspeaking, etc.) for D/deaf people. The last time this was looked at was in 2002 in research conducted by Durham University. (You’ll find a summary of their findings in Annex H).

Whilst DWP conducted the review, they had the guidance of a steering group. NUBSLI were invited to be part of this, along with NRCPD, ASLI, Action on Hearing Loss, NDCS, and others.

I represented NUBSLI at the meetings, drawing on your evidence, and input from the committee.

When looking at the final report, it can be difficult to see what influence the wider steering group, and NUBSLI in particular, had on the final report. So I thought I’d list some of them here:

How is the report useful and how can you use it?

The final report may not look very ‘sexy’, and may to some extent seem to be stating the obvious. But it’s easy to underestimate the importance of having the obvious stated in a government document, especially when stated so pithily in the conclusions. A government document you can quote when engaging with government (including DWP itself), and other public and private bodies.

Extracts from the report

Below you’ll find some quotes from the ES and Conclusions to illustrate this, but you should read the ES and conclusions yourself (10 minutes, tops) to see how you can best use it. And the more it gets quoted in the public domain, the more useful it is. (You can read the full report, including the executive summary, here).

For example, one conclusion from the ES is that “the data … show BSL is the first language of 24,000 people, but there are only 908 registered sign language Interpreters”. When you see this, it is really easy to make the argument that there are not enough interpreters.

Other conclusions are equally useable:

“People who are Deaf or have a hearing loss report not being able to access public services because their communication needs are not met.”

“The lack of agreement on the role of communication support workers can lead to problems in service provision.”

An example of a potentially really useful conclusion from the Annex is:

Language and communication requirements should be addressed on an individual basis, and those that are required to make provision for deaf people should seek the views of individuals, as to what works best for them. There is no universal approach to addressing these needs and requirements will vary from person to person and across situations.

Potentially useful when countering suggested framework agreements that may remove that choice, or ATW decisions that don’t provide sufficient flexibility in funding to enable that.

There are significant time and financial costs attached to training as a sign language interpreter. The numbers of people registering for entry level qualifications is falling, which will translate into fewer people progressing to a full qualification.

Agencies, particularly non-specialist agencies, have played an increasing role in the market for BSL interpretation and the review highlights a number of implications associated with this, including agencies not always understanding the specialist nature of BSL interpretation and the addition of agency fees in some cases considerably increasing the expense of interpreter bookings whilst at the same time lowering fees to interpreters.

“There is no agreed occupational definition of a Communication Support Worker’s role, and no minimum level of skills required for an individual to identify as a CSW.”

(From the ES) “Many responses from organisations, service users and service providers called for there to be a nationally recognised communication support worker (CSW) qualification, with minimum BSL qualifications.”

“Feedback from deaf people and service providers suggests that this can cause problems for commissioners in providing appropriate services.”

“There was consensus from respondents that use of CSWs who are not qualified as interpreters in Higher Education could be inappropriate.” This may be worth sharing with Deaf students who are struggling with the DSA on this one.

It’s also really useful to have this in the ES (which is the only part Ministers will read):

Many interpreters felt that agencies are constantly trying to try to drive down fees and costs, ask qualified interpreters to cover more of their travel costs and do not build personal relationships with interpreter or local deaf communities. Many express concerns that the current structure of the interpreting market is dissuading younger people from entering the sign language profession. There a degree of tension in the market, with avoidance of some agencies (i.e. interpreters and deaf people refusing to accept or commission work via certain agencies because of concerns about the quality of provision).

“Some respondents noted that the lack of communication professionals in their area meant that the cost of sourcing appropriate, qualified interpreters was significantly increased by their travel costs to the users’ location”

There is also useful information in the Annexes (appendices) that it may be useful to share with people or organisations. These include:

There are also nuggets hidden away, e.g. this is taken from Annex C:

“Some respondents also feel that the true cost of professionals who have trained and qualified to have the specialist skills needed to work and communicate with Deafblind people are not taken into consideration when Access to Work awards are calculated, in particular under the first ATW Personal Budgets Trial, which ended in 2017. In response to issues like this, Access to Work is currently exploring whether the next iteration of its ATW Personal Budget trial can introduce ‘Managed Personal Budgets’ where the flexibility is retained by the individual but the finance is held by DWP, reducing the burden on the individual.”

Let us know how you use it.

The report looks at demand (what services people need), supply (what services are available), technology (how is technology affecting communication services, e.g. remote interpreting), and what is likely to happen in the future (future look). There is also a separate section on Communication Support Work (CSW).

Over 200 people and organisations sent evidence, and the report summarises and quotes from that evidence. Unfortunately other government departments did not share much information with the review. It’s important to note that the Review had to include all the evidence sent in, and that NUBSLI, along with the other steering group members, weren’t in a position to ‘veto’ evidence we disagreed with. However, usually it is clear in the evidence where views are minority views.

The DWP is doing a BSL translation of the Introduction, Executive Summary and Conclusions that will be available soon.  Unfortunately the snap election, and need to publish before the summer recess, meant they weren’t able to release the English and BSL versions concurrently.