On this campaign page you can: 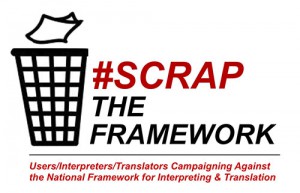 What is the #ScraptheFramework Campaign?

The National Union of British Sign Language Interpreters (NUBSLI), a branch of Unite, launched the campaign in February 2015. The campaign is a response to the national framework for interpreting and translation services which users, interpreters and translators oppose.

There are currently three main national frameworks which we are aware of, these are:

You can read our open letter that was sent to France Maude concerning the CCS Framework Agreement. Visit the CCS website for more details.

To date (according to information received from PI4J) in addition to courts using this framework, the following police forces in East Anglia are considering using the MoJ contract:

NUBSLI wish to make it clear that BSL/English Interpreters are not prepared to jeopardise the sustainability of their profession by accepting the diminished fees, and terms and conditions set out in these frameworks. These are not fitting for a workforce of extensively trained and qualified freelancers, and clearly go against market rates falling short of the industry standard.Government are regrettably overlooking the counsel of the profession.

We have already seen the boycott of one NHS contract by interpreters in the South West. Interpreters are increasingly prepared to take a similar position with other contracts which do not meet our basic rates of pay and terms. We will be continuing to campaign against these frameworks and will work with individual commissioners wherever possible. We have also seen one agency – Pearl Linguistics – go into liquidation.

The overarching issues with each of the above frameworks are:

Here's what you can do

We use cookies to ensure that we give you the best experience on our website.OkNo, don't use cookies.